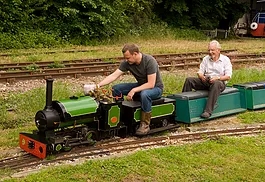 Bressingham has recently added to its range of railways with a dual gauge miniature circuit.

The circuit is of dual 5” and 7.25” gauge and is about 200 metres in length in an oval formation.  It is located behind the main locomotive shed and runs around the existing small heritage fairground site.  There is one turntable and set of points and trains follow a unidirectional path to the single platform.

The railway has been built upon a well-ballasted formation with a drainage trench to one side.  The track is of steel rail welded to steel sleepers and it is (apart from access points) fenced off from pedestrians.

Its main purpose is as a training aid for Bressingham’s “Young Steamers” club.  This is a group of young volunteers aged between 10 and 16 who have a keen interest but because of health and safety regulations cannot be permitted to work on the museum’s passenger carrying railways.  The miniature railway offers them an opportunity to develop their skills and interest in railways and steam engines in a relatively safe environment and within the confines of the law.

The principle motive power is a 7 1/4 ” gauge ‘Stafford’ type 0-4-0 steam locomotive, based on the 2ft gauge Bagnall saddle tank design and one of a production model produced by Station Road Steam Ltd.  It was purchased as a kit and has been assembled by the Young Steamers under supervision.  The railway is also an added visual attraction to visitors of Bressingham, and on occasion will be used for the carriage of fare paying passengers.

We hope it will prove an interesting addition to Bressingham’s already varied collection.

The 30th May 2015 was a Young Steamers day and so started their training involving a steam engine.  The first job was to put the 7¼ʺ gauge Stafford loco onto the turntable, once that was  completed, being mindful of all the Health & Safety aspects, we could start on raising steam, which is another part of their training.  I drove the loco round the track, then the Young Steamers, under my strict supervision each had a turn.  As we had to cancel the previous weekends public running, due to bad weather and as several members of the public expressed an interest in the railway, we ran about ten trips for the public, Geoff Calver driving the first one and myself driving the subsequent runs.  The Young Steamers had a go at driving in between the public rides before, near the end of the day, it was time for more instruction i.e. disposing of the loco.

All in all the loco must have done about thirty to forty trips round the track. It will be interesting to see how it performs on a full public running day!

(Further to the above I can report that the loco was steamed for a full day on two subsequent occasions and performed faultlessly. It steams well, provided it has ample firing, and is surprisingly powerful for such a small engine.  MG)