Robbie the roller is a Kingsway heated patent roller made by Robey’s of Lincolnshire (patent no 237129/1924).  It is a static exhibit at Bressingham.

In November 2015 two volunteers John Rivers and Alan Spearman were asked if they would refurbish the roller and put a new roof on to replace the old one, which had rotted over the years. Below is described the process used and lessons learnt.

They can be summarised as follows –

1/ take as many photos as possible – the memory plays tricks over time.

2/ make a detailed drawing of the new roof

4/ use the internet to research techniques

5/ take advice from staff and other volunteers at Bressingham, as they have a wealth of experience and could advise on techniques.

6/ keep referring to the photos and drawings.

This type of road roller has a narrow rear roller which makes it unstable in use – there is a history of these rollers falling over. 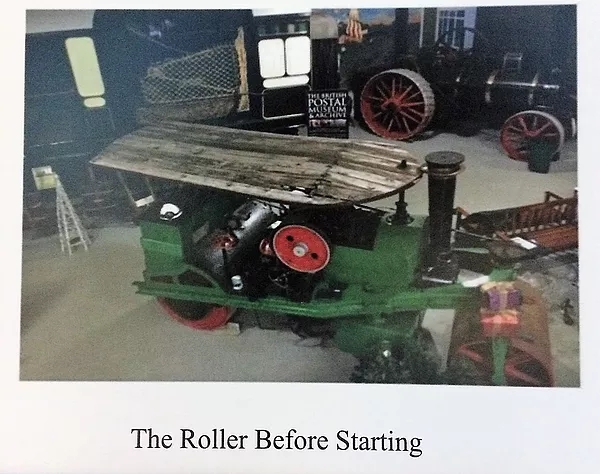 Stages in the refurbishment –

1/ We took many photos from every angle possible to record how the existing roof was fixed to the roller. These identified the four upright stanchions had been bent when the roller fell over. The coal box at the back of the roller had also rotted on three sides at the bottom.

2/ The existing roof was constructed from tongue and groove screwed to a solid external frame which had been made from solid wood. The front of the roof bends down and the safety valve vertical exhaust pipe exits through the roof at this point. It was identified there is a minimal clearance between the front of the roof and the chimney. The roof is under the lip of the chimney.

3/ To make removal of the roof as easy as possible individual sections of the tongue and groove were first removed.  This made the roof light enough that with help from other volunteers it could be removed.

4/ A working platform was constructed from three large pallets. These were levelled and screwed together to form a stable base.

6/ The existing roof was constructed from a solid section of wood formed into a half circle at the front and running along both sides of the roller. This made the rim of the roof.  The cross members were bolted to this rim.

7/ The roof was made from tongue and groove screwed to the exterior rim.

8/ The roof is bolted to the vertical supports by two metal cross members made from angle and formed into an arch.  There are three wooden cross members following the same profile as the metal ones.

10/ To manufacture a new rim a sheet of 8ft by 4ft plywood was cut into strips, formed into the radius and glued together.

11/ Blocks of wood were screwed onto the outer and inner radius and along the length of the rim.

12/ Strips of plywood were softened using hot water to prevent cracking when bending onto the radius.  It was essential the joints in the plywood strips were staggered to ensure maximum strength was maintained.

13/ Using Gorilla glue the plywood strips were joined together and multi clamps applied to pull the strips in and follow the radius.

14/ When the rim was complete the two metal and three wooden cross members were bolted in place resulting in a frame for the roof.

15/ To create the bend at the front of the roof saw cuts were made in the tongue and groove halfway through the thickness on the underside of the wood. This process is called Kerfing and examples can be found on YouTube. To assist the bending process the tongue and groove was fixed on trestles and a weight applied to the front section ahead of the Kerfing.  Hot water was used to soften the wood until a bend was obtained and the Kerfing gap closed.

17/ Working up and outwards from the centre line new sections were glued up to the bend and screwed in place.

18/ At the front section where the roof pitches down it was necessary to use a small plane to taper the planks towards the front. This was needed as the planks accommodate movement in two axes, down and around the radius of the roof. This area was not glued down until all planks were known to fit.

19/ The roof was then lifted onto trestles and it was noticed the saw cuts in the Kerfing had closed when the front section of the roof was pulled down to the outer rim. Using a multi tool which had a reciprocating blade the gap was re-opened to give clearance allowing the front section to be glued and screwed in place.

20/ On the outer sections the tongue and groove were removed. 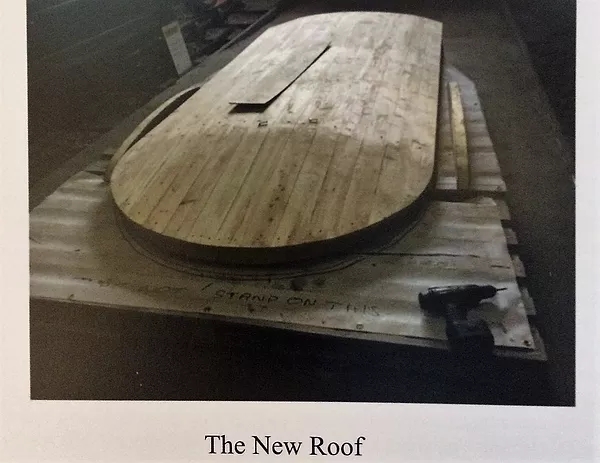 21/ The coal box at the back of the roller had rotted through on the three sides at the bottom. New sections of plate were cut, the old sections cut out and used as a template, the new metal tack welded in place and then fully welded, dressed and filled to create a smooth surface prior to painting.

22/ The damage to the coal box had been caused by fitting a section of chequer plate to the bottom of the box covering drainage holes. As the chequer plate had rusted this was removed, the drainage holes cleared and then repainted. The holes that support the vertical stanchions were drilled in the new metal. 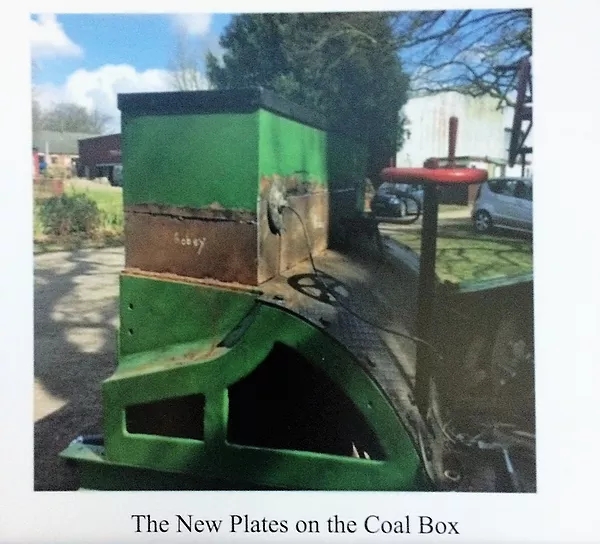 23/ The two front vertical stanchions could be straightened in situ. The rear two had been bent in several places caused when the roller tipped over. These were removed, heated with a propane torch and straightened.

24/ To ensure the new roof would fit it was turned over and the rear vertical stanchions bolted to the metal cross beam. The centres of the stanchion to coal box were measured and a slight adjustment made by reheating and bending to obtain the correct dimensions. This provided confidence that the roof would fit when lifted on.

25/ The new roof was rubbed down, filler and sealer used where needed and then several coats of paint applied. The roof was turned the correct way up and new felt fitted to make a waterproof seal. The old roof had had no felt on it.

26/ To fit the new roof the vertical stanchions were screwed in place, the roof being carefully lifted into position by a forklift.  By using a podger bar (a spanner with a tapered end) one of the two holes on the cross beam were lined up and then bolts were fitted. The roof was then fully secured in place.

27/ A sealing strip was fitted under the roof edge to hold the felt in place and provide a cosmetic finish. This was made from soft aluminium and bent to follow the profile of the outer rim.

28/ The seat was repaired and bolted back into place.

29/ A new scraping bar was fitted to the front roller.

30/ Finally when the roller was moved back into the exhibition hall it was painted where required to finish the refurbishment.

Thanks are expressed to Phil in the workshop and Brian in the Horsepital for advice, loan of tools and assistance given.

John’s background was in Lotus cars and Alan’s in nuclear power stations, neither are ‘wood’ technicians and we learnt a lot. 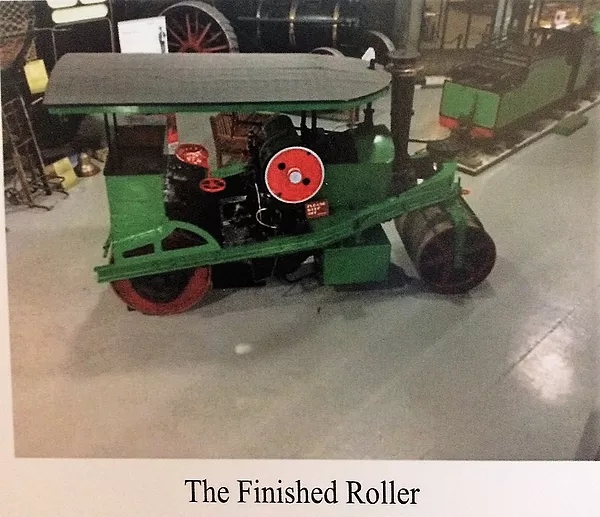